For PE bag production, single layer blown film machine has been the most common type of extruder to use. It is probably still the best machine for products such as fruit and vegetable bags (perforated bag-on-roll) that use mainly virgin materials with low film thickness ranging from 6 to 18 microns. Single layer machine is also the favorable choice for biodegradable bag production.

Mono (single) layer extruder has been the most common blown film machine used in the bag production sector. Most producers are familiar with screw sizes of Ø 45mm, Ø 55mm and Ø 65mm for producing different types of bags in both HDPE and LD/LLDPE. Some prefer twin head mono layer machines for small-sized and thinner bags.

Single layer vs ABA extruder for bag production, which one is better?

Even though single layer extruder is more than enough for general bag production, ABA co-extrusion (3 layer) machine has its advantage over one layer machine for certain applications like garbage bags, shopping and T-shirt bags that are higher in thickness (20 to 100 microns) or require more film strength. In markets such as Australia and the UK, producing larger-sized garbage bags with ABA co-extrusion lines has already become the industrial standard.

Besides having the ability to produce film with higher strength, ABA blown film extruders also allow producers to use more recycled material and calcium carbonate compounds (CaCO3) in the mixture. The advantage is clear especially when producing film in higher thickness, in which material cost can be significantly reduced while good film quality can still be maintained - shiny on the surface and good for sealing, although a high percentage of recycled material is used.

In countries where bag production market has become extremely competitive, some producers have started to change from single layer extrusion to ABA co-extrusion blown film machines in order to reduce production cost and stay competitive. New regulations in Europe also require bag producers to use a high percentage of recycled material for shopping bags and garbage bags, whether they are produced locally or imported. Vietnamese producer focused on export markets is changing to ABA co-extrusion machines from mono layers for garbage bags in order to meet the new market demands. 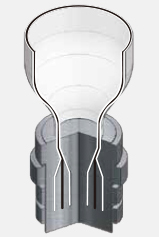 Technically, in ABA type film, the outer and inner layers will be of the same material fed by the same extruder and a middle layer will be of a different material that will be fed by a second extruder. A higher percentage (up to 50-70%) of calcium carbonate compounds or recycled material can be used in the middle layer of the film, thus cutting down the usage of virgin raw material and reducing production cost.
This drawing of an ABA die head shows how the middle (B) layer is covered by the (A) inner and (A) outer layers. A high percentage of recycled material is usually put in the middle layer and “sandwiched” by the inner and outer layers using better quality materials.

Besides reducing a significant amount of raw material used in the formula, another advantage of the ABA machine is that the 3-layered film that it produces is 30% stronger than the mono-layer film produced by a single extruder.

This drawing of an ABA die head shows how the middle (B) layer is covered by the (A) inner and (A) outer layers. A high percentage of recycled material is usually put in the middle

ABA has only two extruders whereas ABC has three extruders. In most bag applications where producers can use the exact same materials in the outer (A) and inner (A) layers, ABA can achieve the same result as ABC (in terms of film strength and material cost reduction) while saving on the machine investment and electricity cost.

The main advantages of ABA
comparing to single layer machines are:

Cost saving : Virgin material is applied mainly on the outer (thin) layers which is relatively a small percentage of the film composition. These thin layers can cover the middle layer well enough for shiny film surface and good sealing.

Better material mixing : with co-extrusion process to produce better quality film (in which the material is more evenly distributed on the surface), especially when using recycled materials. The effect is very similar to ABC for bag applications.

Bag producers in India, Turkey and Russia leading the way for using ABA. Vietnam, Indonesia and GCC are on the rise.

The usage of ABA co-extrusion machines for shopping bag production has already been very popular for years in markets like India, Turkey and Russia. In the gulf region such as Saudi Arabia and Oman where thicker shopping bags are produced are also in high demand. In Asia, Vietnamese producers who focus on exports markets for Australia, Europe and the US are also adding ABA machines their production. Polystar introduced its ABA machine in Russia for the first time in a 2012 exhibition in Moscow. Since then, more than 30 producers in Russia have been using this extrusion technology for T-shirt bag production. The most popular model is the combination of Ø 45mm + Ø 55mm extruder with 1100mm winder width. 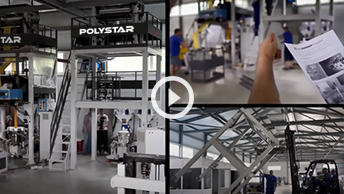 Video of ABA machine in exhibition in Russia

Single layer machine is still better for some applications

Despite all the unique benefits that the ABA machines have, single layer machine is still the better choice for many applications – especially for thin HDPE bags using mostly virgin material. The thinner the film is, the less difference and less cost-effective it is to use an ABA machine. Besides being lower in machine cost, single extruder is generally easier to operate, consume less electricity, and occupy less factory space comparing to ABA and other multi-layered machines. Single extruder, twin-head machine for LDPE production for film width 400-600mm, using up to 70% recycled material. The Ø 75mm screw can produce up to 140kg/hr even for small-sized film rolls. The leading Mexican bag producer located in Jalisco has found this model to be the most cost-effective machine for the application. Combination of ABA and single layer usage is the key

The fact that single layer and ABA machines each has its advantage over the other, many film and bag producers use a combination of both machine types to target specific products (of different width, thickness, and recycled materials allowed) in order to achieve the maximum production efficiency.

Polystar has specially designed the extrusion screw to work with the highest possible percentage of recycled material, whether it is a single layer or ABA machine. This allows the film producers to be more flexible when making different products with different formulas and materials. Indonesia-based producer Cahaya Kharisma who produces over
2,000 tones of plastic bags per month, uses both ABA 3-layer
extrusion and single layer extrusion machines for different types of
bags, having found the right machine for each specific product to maximize production efficiency and reduce cost.

Producer in Vietnam is using up to 80% of recycled materials in mono layer extruder, thanks to the special screw design.

Headquartered in Taiwan, POLYSTAR has focused on user-friendliness of its machines through continuous re-engineering, making recycling extremely “Simple” for its users – Easy operation and maintenance is what makes POLYSTAR the No.1 selling recycling machine today. Over the past 32 years, more than thousands of POLYSTAR recycling machines have helped worldwide plastic producers to reprocess their post-industrial (in-house) waste back into high quality pellets in a simple and easy way.

In order to process your inquiries, please register for FREE and sign in!